What will Connor McDavid do for his sophomore season? Can he crack the 100-point barrier? Is the Art Ross a possibility? Those are the questions on the lips of many hockey fans around the globe. Therefore, with the season just about to begin, predictions become all the rage with it being time to put your best educated guess on the line. Last year I predicted that Connor McDavid would finish with 71 points in 77 games for a PPG of 0.92. McDavid would go on to finish with 48 points in 45 games for a PPG of 1.07. It turns out I was not bullish enough on Connor McDavid and should have went with my most optimistic prediction that “an optimistic McDavid fan could go as far as predicting that McDavid will be a point-per-game player and that would not be unreasonable, based on other highly touted rookies.”

For this year’s prediction, I turn once again to the past. Recently, I did a post about the best 18 year old rookie seasons based on how a rookie did in points-per-game compared to that of their peers. For the measurement, the PPG of an 18 year old rookie was compared to the average PPG of the top 10, top 30 and top 50 forwards in the league for that season.

McDavid sits second on the list, well behind Gretzky, but in the same range as other generational players in Lemieux and Crosby. Therefore, to predict how McDavid will do in year two, I first need to see how the other eleven rookies progressed in scoring production for their second season. Using the same measurement of comparing PPG to the top forwards in the league the results are: 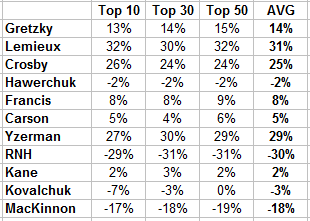 With the generational players in Gretzky, Lemieux and Crosby, all three saw a marked improvement in production of between 14-31% from the previous season. Overall, these three players saw a 23% increase in scoring relative to their peers from season one to season two.

Meanwhile, the other eight players, who were drafted as potential franchise forwards, can range from seeing large improvements, such as for forward Jimmy Carson to sophomore slumps for Ryan Nugent-Hopkins and Nate MacKinnon. Overall, the production for these eight forwards saw a slight dip in production of 1% from their rookie season to their sophomore season.

For McDavid, I have chosen to do a weighted average for my prediction based on the progress of these eleven players. Therefore, 90% of my prediction is based on McDavid progressing similar to that of past generational forwards, while 10% of my prediction is based on McDavid having some sort of setback in his sophomore season where his scoring rate remains the same as in his rookie season. Therefore, my weighted average predicts that McDavid will see a 20.8% increase in scoring production for the 2016-17 season.

While most prognosticators believe McDavid will score at least at a point-per-game pace, there are varying opinions on how many games he will play this season. With two injury-plagued seasons under his belt, it is not a surprise that an individual would question whether McDavid will stay healthy this year. However, both injuries are more to do with poor luck and are not chronic injuries that one expects to happen from season to season. Therefore, I am counting on that run of bad luck to end this season. When looking at the same eleven forwards used in calculating McDavid’s PPG, 9 of the 11 forwards played in at least 95% of the regular season games during their sophomore season, meanwhile, the median for games played is 99%. Therefore, while others may be playing it conservative with the amount of games played by McDavid I am going the opposite route. Therefore, I am using the median percentage of games played as the basis for the number of games McDavid will play in 2016-17. Therefore, 99% of an 82 game season is 81 games.

The final step is the ratio of goals to assists, which can change year to year for a player. Due to this, I have calculated McDavid’s goals to assists ratio since his 2012-13 rookie OHL season. Including playoffs, McDavid has scored 138 goals and 263 assists meaning that 34.4% of his points are goals.

Therefore, if we apply a 20.8% increase to McDavid’s rookie scoring rate of 1.07 PPG, we get a predicted PPG of 1.289. When we apply that PPG to an 81 game season where 34.4% of the scoring is goals, we end up with this prediction for Connor McDavid’s sophomore season:

In the last three seasons, only Crosby in 2014 and Pat Kane in 2016 have crossed the 100 point threshold. Therefore, it is a good bet that this season only one individual will cross the 100-point barrier. That means McDavid will not only break the 100-point barrier this season, I predict we will have the youngest Art Ross winner since Sid the Kid did it back in 2007. The 2016-17 NHL season will be the Year of McDavid.