Welcome to the Blue Bullet 2018 NHL Entry Draft Guide. Another season is in the books, which means it is now time to turn our attention to those young men who each are trying to make the difficult goal of playing in the NHL. After countless hours of practice and games, 217 of the best draft eligible players will be weeded out and selected by one of the thirty-one NHL teams. Of those players selected, few of them will turn out to be long-term NHL players. Therefore, it is the job of each team to do their research to create the very best draft list through use of scouting and statistical analysis.

While the public is not able to see an actual team’s draft list, there are many draft guides available for purchase, with the majority of them focusing on the scouting aspect of the draft. Very few incorporate statistical analysis and this is a weakness of many draft guides. While the eye test is beneficial, it does not tell the whole picture. I did a previous study on CHL forwards drafted in the first round between 1990 and 2010 and found that when selecting a CHL forward, on average, teams would have been better off by simply selecting the CHL forward who had the highest point-per-game in their draft season. Relying simply on scouting will not give a team the best results and that is why one must look for where scouts and stats collide.

To create my rankings, I have always started by using the average rankings of a player from the various draft guides as my base. It is a good starting point as it averages out the varying opinions on a player, from the different scouting guides. However, the problem with averaging out the draft rankings in this fashion is that it is suggesting that the value of a draft selection decreases in a linear fashion. That is not the case. Instead, the value of a draft selection decreases at an exponential rate. 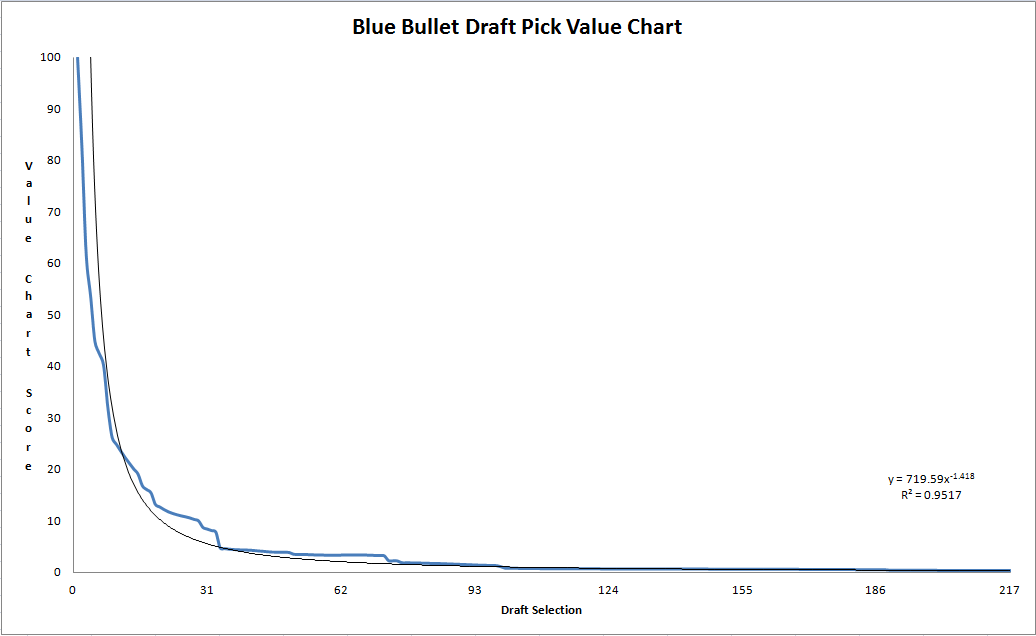 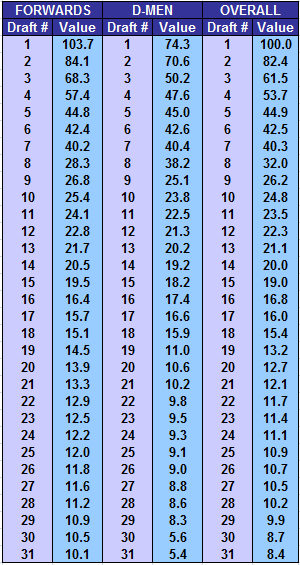 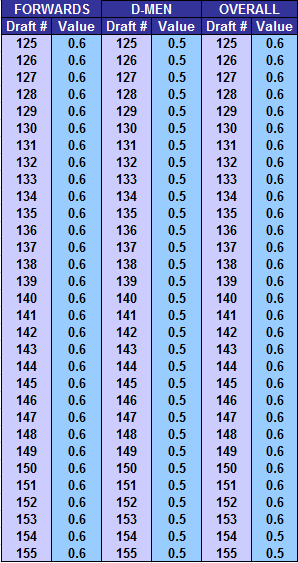 To utilize the Blue Bullet Draft Pick Value Chart, to create a consensus ranking, one starts by simply substituting the values from the chart for the corresponding draft position. For example, if a forward is ranked 12th they will receive a score of 22.8, meanwhile a defenseman ranked in the same 12th position will receive a score of 21.3. From there it is simply averaging all the scores and ranking from highest score to lowest.

For those disbelievers that have little faith in the numbers, this is where you would stop and simply go by what the scouts are saying. However, I know there is value in the numbers and will continue forward. The research I will be utilizing for forwards is based off of my NHL point prediction model called NHLP. NHLP is a tool to project the future upside of a CHL forward by predicting how many points they would score in their best NHL season (based on an 82 game season).

The formula is based off my research that shows that for CHL forwards, who play at least 250 NHL games, over 1/3 of their future NHL production can be explained be their junior production, in the season they become draft eligible. The formula accounts for the following three factors:

The results for every CHL forward selected in the first round since 1998 can be found here.

Using my NHLP formula, I have done research on finding ranges of NHLP scores and draft positions in which forwards have similar value in terms of NHL career average points per game. The results are:

Note: The average PPG is based off of those forwards who reached 100 games played.

With defensemen, I do not have a point prediction model to utilize, as there is a weak correlation between junior scoring and NHL scoring. What I utilize instead is the fact that, overall, power play scoring does not carry over to the NHL at the same rate as non-power play scoring. Therefore, when evaluating defensemen, I adjust power play scoring so that it is worth 58% that of a non-power play point. So does that mean the higher the number, the better? Not exactly. While it does give insight into the offensive potential of a defenseman, it is better utilized as a pass/fail measurement. Research done by Rhys Jessop showcased that CHL defensemen who scored at a rate of 0.55 Pts/game or better turn out to be much more likely at becoming a NHL defenseman. It makes intuitive sense to those watching today’s NHL game given that the best defensemen tend to have the best puck skills. Taking this knowledge into account, I found that for my adjusted point per game measurement the cutoff was 0.44. Therefore, for defensemen I have created two value charts, one for defensemen who have an adjusted PPG of 0.44 or above and one for those who do not.

While my value chart for forwards is based on NHL career average points per game, my value chart for defensemen is based on their NHL career ATOI (average time on ice). However, that is comparing apples and oranges and therefore a conversion chart was created to convert the career ATOI of a NHL defenseman into an equivalent PPG measurement so that I could compare forwards against defensemen. A sample of the conversion chart is as follows:

With the two value charts for defensemen, the results can be staggeringly different from each other. For example, defensemen selected between 19th-29th, who have an adjusted PPG of 0.44 or greater, end up having a converted PPG that is 129% greater than that of an average selection in that range. Meanwhile, those that fall below 0.44 points per game, have a converted PPG which is 75% that of an average selection in the 19-29 range. Therefore, a defenseman ranked 24th overall with an adjusted PPG of at least 0.44 will receive a value of 12.0 while those below 0.44 will receive a value of 7.0. What the stats are telling us is that stay at home defensemen are consistently overrated by the scouting community, likely due to their love of size.

With all my various value charts completed, there is one last item to address before I could apply my rankings, which is the fact that all my research is based off CHL players. This is due to the CHL having the largest collection of data in which to base my research. This is where NHL equivalency (NHLE) will come into play. Therefore, for all players outside the CHL, I tried to do an estimate of what NHLP group they will fall into for forwards and for defenseman, I tested whether they passed the pass/fail measurement of 0.44 points per game or better. One problem, I ran into is lack of data, especially from the European leagues which could make it difficult to do a proper estimation. The other issue is that there are a few European prospects that play primarily in pro leagues. While NHLE helps resolve this issue somewhat, the lack of data on time on ice makes it difficult to estimate an NHLP score. For example, Jesperi Kotkaniemi has 30 points in 64 games in the SM-Liiga (regular seasons and playoffs combined), which has a NHLE of 0.452 while the WHL has a NHLE of 0.302. Therefore, that means Kotkaniemi would score roughly 45 points in 64 games in the WHL. That number would be understated, as it does not account for the fact that Kotkaniemi would play more minutes in the CHL compared to playing in a men’s league in Finland. Therefore, I had to make assumptions of how much his playing time would increase if he played in the CHL. Based on that loose estimate, Kotkaniemi falls into the 55-61 range for NHLP, similar to my estimate for Lias Andersson in 2017.

The rankings will not be separated between skaters and goalies despite having zero value charts completed for goaltenders. Instead, I use the overall score from the Blue Bullet Draft Pick Value Chart. In a previous post, I analyzed the expected draft value of goaltenders based on their likelihood to reach 50 games played. I than compared this against the likelihood of skaters reaching 100 games played. I concluded that “the best method of drafting goalies is to stay away from using a first round pick on a goalie (unless it is an exceptional goalie) as the odds are significantly better if you draft a forward or d-men over a goalie (over 40% better). Instead, the best time to draft one of the top rated goalies from North America or Europe is to grab them in the 2nd or early 3rd round. Goalies in this range tend to out perform the forwards and d-men by 50% and if you wait to long all the good goalies will be gone. However, this year is not a very good year for goaltenders with my top ranked goalie being Jakub Skarek at 72nd overall.

And there you have it. My method of creating a draft list based off of finding where scouting and statistics meet. While in the past I would pour over the scouting reports reading every detail trying to determine what insights I could grab from the reports, I have chosen to forgo that process going forward. The theory behind this is that the work is redundant as I am basically scouting the scouting reports. While I would like to think I am good at doing this, I have no evidence of that and to just assume I do would be a fallacy on my part. Instead, I will let the rankings from the scouts and from my statistical measurements do the speaking for themselves. With that in mind it is finally time to get down to the rankings.

The rankings are based off of the draft value charts I created to find where scouts and stats collide. While at times it can be hard not to allow my own views on players to get involved, it can be freeing to let the numbers speak for themselves, which is what this model allows me to do. For this year I have expanded the number of draft rankings that I utilized to include the following:

For each forward, I have presented their NHLP score, which is my point prediction for their best NHL season. Where possible, I have also presented the breakdown between power play and non-power play estimates. Remember for many of the European players I was only able to estimate which group they most likely belong and that some assumptions needed to be made so there is less accuracy when it comes to my ranking of European players. In addition, I also presented the percentage team contribution to scoring, which is the percentage of goals they receive a point (goals scored in games missed are removed). As with NHLP, it is separated between non-power play and power play totals. To get a better picture of NHLP, I have created some pie charts to show the distribution of forwards selected top 90 overall as well as the distribution based off of career average point per game. 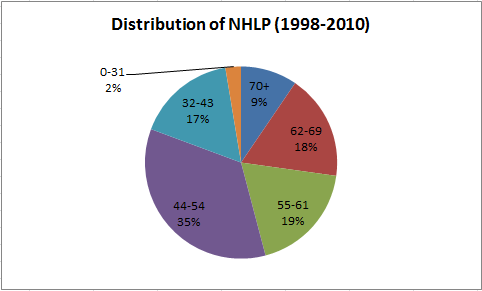 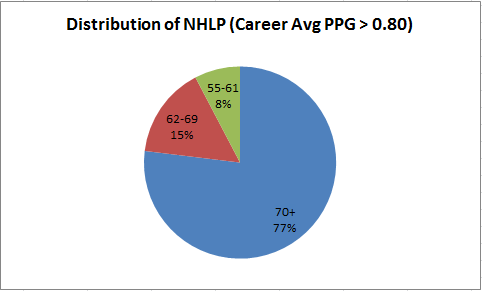 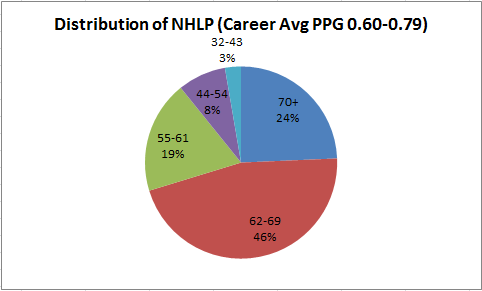 One is much more likely to find a top six forward if they select a player with an NHLP above 62. 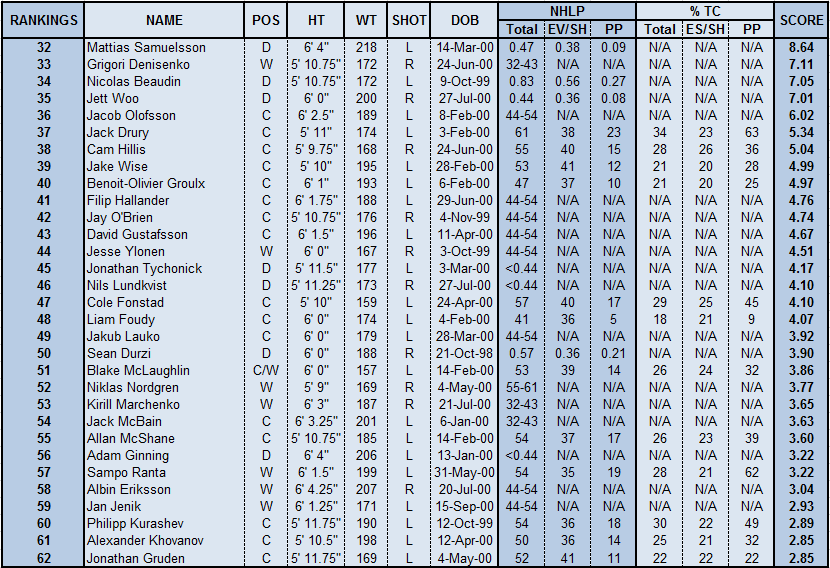 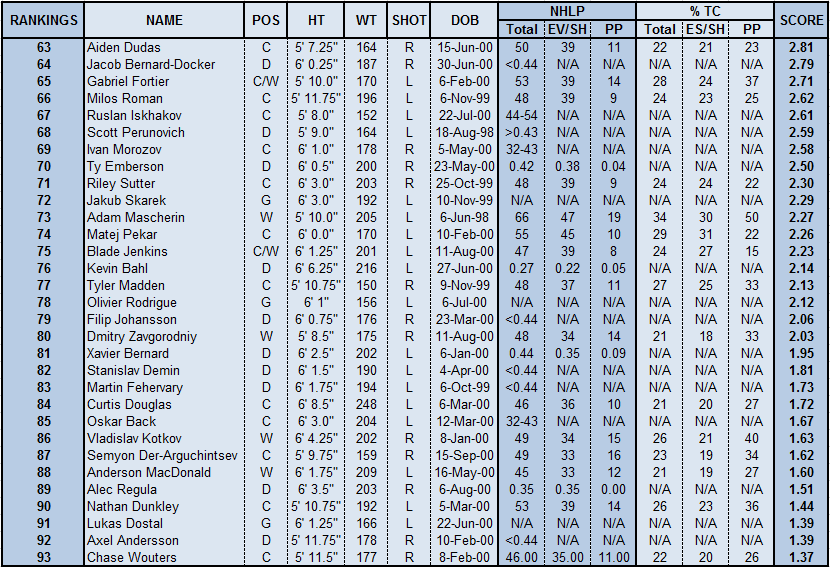